How did I end up here?

How did I end up here? By Wesley Kew, Clinical Psychologist

Recently I have been plagued by a gnawing sense of irritating – and questioning all that I see and experience around me. I was reluctant to hang out with people, easily frustrated by petty and trivial interactions and most prominently struggling to sleep well. Soon I was walking around with hate in my heart and self-righteousness in my head. This soon started to affect my body as I began to experience a stiff lower back, was physically fatigued and my skin started to take a toll.

Rapidly I became ever more engrossed, enmeshed and one with the ‘problem’. I was not sure what the issue was or;

Where had this issue began,
Who was responsible,
Who was adding to the issue,
What was the actual problem and
When did I realise that this is in actual fact a problem?

I was determined to get to the bottom of this so-called problem. In fact I even began to question those that I hold closest to me, going as far as even cutting them out from my daily interactions.

As you can well imagine I was soon isolated, angry, sad and bordering on resigning my self to my fate. Then I read a quote by H. D. Thoreau

Most men lead lives on quiet desperation. What is called resignation is confirmed desperation.

And that is exactly what I was becoming, desperate; desperate for some insights and desperate to take back control of my life! 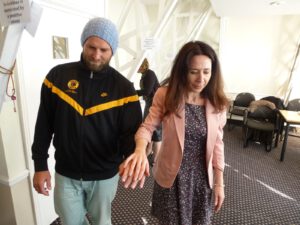 I thought about my mind and who was in fact taking control? And I reminded myself to trust my NOW STATE and the unconscious mind to bring about the resolutions I needed. Soon the presuppositions of NLP began to flood forward and the two that stood out were:

I began to question the structure of my thought and what my payoff was for being such a miserable and ever more ill person.

Then one of my favourite Einstein quotes flashed into existence again

We can’t solve problems by using the same kind of thinking we used when we created them.

Then it dawned upon me that I had become so engrossed with my perceived problems and issues that I lost sight of the solution.

When I stood back and began to think about how I wanted my life to play out I saw that I was thinking and acting like a victim. Blaming everyone, anyone and everything for the way I was feeling. Not for a moment did I consider the fact that my decision-making was the problem.

It was only when I decided to find potential solution and seek out the resources that are and will always be abundant with me, that understanding and peace soon followed. Does this mean that I will never again experience situations like this, does it mean that I’m free of dissonance forever? Absolutely not! Because just like taking a shower and brushing your teeth, we need to decide to be better versions of ourselves each and every day. This is especially needed during the times that we don’t feel like doing what we know is ultimately in our best interest.

At the end of the day you are the one that gets to decide what kind of life you desire. This is best encapsulated by Benjamin Franklin when he stated

If you fail to plan, you are planning to fail!

Your life has been created by your decision making, so take responsibility for what you have created.

If you are not living the life you desire, stop blaming and begin creating!

How did I end up here? By Wesley Kew, Clinical Psychologist