I had an enquiry to work with a writer with a block recently. I got an idea of what she wanted over the phone, how we’d work and the result she’d get. Then the money. I actually worked for £80 for an hour (my normal charges are £300 per hour). But that was her budget and I wanted to work with her. I actually did a free session on Wednesday because I wanted to work and saw the value I’d get as well. It’s not always about the money!

So – I got her to pay the money up front and send me her highest values and loves in life before we met on Skype (ordeal).

Then, when we met on Skype I set up the boundaries and paradigms of thinking about the session. I told her I may use ‘funny’ language, somethings she may not understand fully, and even I may use politically incorrect language if she agreed it was a for a greater cause. 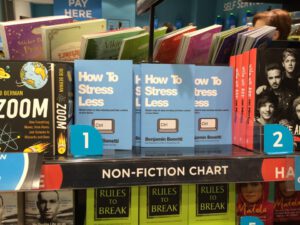 She agreed, so I talked about belief systems, religion and anything I could think of to get her model of the world. Then I asked her many questions (meta-model and curiosity) about being a writer and this thing called a writers block. It came to pass that she had written a screen play over twenty years back that had been turned down by ONE organisation. Now she was trying a new method of writing. So, really we could dispense with the label “writers block” because she had never really been one!

Now we are looking at someone who wants to write, but her logical mind is stuck in how. Once we’d loosened all that up, I used some standard hypnosis and deepening techniques to get her into a receptive energy mood.

Then I introduced a metaphor to shock her logical mind and make her unconscious mind sit up and listen.

I used plenty of ambiguity (Milton Model) like “Now you are curious, right (write)?”

Then I took her on a long journey where she could find resources that would assist her (again with plenty of suggestions that “beyond your logical mind…you know how to do this…”).

The session was just over an hour. Pleased client. I gave her some homework to do about mixing things up, getting out of bed with a different leg, going to another supermarket than normal etc. to keep her logical mind guessing. I’ve asked to check back in on Monday.